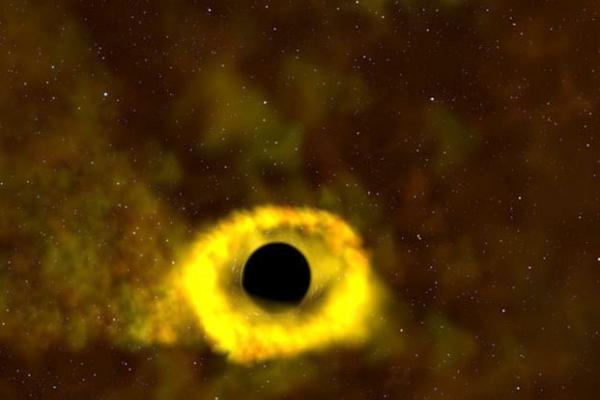 “Lucky” observation gives most detailed look ever of the phenomenon

A NASA satellite searching space for new planets gave astronomers an unexpected glimpse at a blackhole ripping a star to shreds.
It is one of the most detailed looks yet at the phenomenon, called a tidal disruption event (or TDE), and the first for NASA’s Transiting Exoplanet Survey Satellite <https://www.nasa.gov/tess-transiting-exoplanet-survey-satellite> (more commonly called TESS.)
The milestone was reached with the help of a worldwide network of robotic telescopes headquartered at The Ohio State University called ASAS-SN < http://www.astronomy.ohio-state.edu/asassn/index.shtml> (All-Sky Automated Survey for Supernovae). Astronomers from the Carnegie Observatories, Ohio State, and others published their findings today in The Astrophysical Journal <https://iopscience.iop.org/article/10.3847/1538-4357/ab3c66/meta> .
“We’ve been closely monitoring the regions of the sky where TESS is observing with our ASAS-SN telescopes, but we were very lucky with this event in that the patch of the sky where TESS is continuously observing is small, and in that this happened to be one of the brightest TDEs we’ve seen,” said Patrick Vallely < https://u.osu.edu/vallely.7/> , a co-author of the study and National Science Foundation Graduate Research Fellow at Ohio State. “Due to the quick ASAS-SN discovery and the incredible TESS data, we were able to see this TDE much earlier than we’ve seen others — it gives us some new insight into how TDEs form.”
Tidal disruption events happen when a star gets too close to a black hole. Depending on a number of factors, including the size of the star, the size of the black hole and how close the star is to the black hole, the black hole can either absorb the star or tear it apart into a long, spaghetti-like strand.
“TESS data let us see exactly when this destructive event, named ASASSN-19bt, started to get brighter, which we’ve never been able to do before,” said Thomas Holoien, a Carnegie Fellow at the Carnegie Observatories < https://obs.carnegiescience.edu/>  in Pasadena, California, who earned his PhD at OhioState. “Because we discovered the tidal disruption quickly with the ground-based ASAS-SN <http://www.astronomy.ohio-state.edu/~assassin/index.shtml> , we were able to trigger multiwavelength follow-up observations in the first few days. The early data will be incredibly helpful for modeling the physics of these outbursts.”
ASAS-SN was the first system to see that a black hole was ripping a star apart. Holoien was working atthe Las Campanas Observatory < http://www.lco.cl/>  in Chile on Jan. 29, 2019, when he got an alert from one of ASAS-SN’s robotic telescopes in South Africa. Holoien trained two Las Campanas telescopes on the tidal disruption event and then requested follow-up observations by other telescopes around the world.
TESS already happened to be monitoring the exact part of the sky where the ASAS-SN telescope discovered the tidal disruption event. It was not just good luck that the telescopes and satellite aligned —after TESS launched in July 2018, the team behind ASAS-SN devoted more of the ASAS-SN telescopes’ time to the parts of the sky that TESS was observing. But it was fortunate that the tidal disruption event happened in the systems’ lines of sight, said Chris Kochanek <https://astronomy.osu.edu/people/kochanek.1> , professor of astronomy at Ohio State.
Tidal disruptions are rare, occurring once every 10,000 to 100,000 years in agalaxy the size of the Milky Way. Supernovae, by comparison, happen every 100 years or so. Scientists have observed about 40 tidal disruption events throughout history (ASAS-SN sees a few per year). The events are rare, Kochanek said, mostly because stars need to be very close to a black hole —about the distance Earth is from our own sun — in order to create one.
“Imagine that you are standing on top of a skyscraper downtown, and you drop a marble off the top, and you are trying to get it to go down a hole in a manhole cover,” he said. “It’s harder than that.”
And because ASAS-SN caught the tidal disruption event early, Holoien was able to train additional telescopes on the event, capturing a more detailed look than might have been possible before. Astronomers could then look at data from TESS — which, because it came from a satellite in space, was not available until a few weeks after the event — to see whether they could spot the event in the lead-up. Data from TESS meant that they could see signs of the tidal disruption event in data from about 10 days before it occurred.
“The early TESS data allow us to see light very close to the black hole, much closer than we’ve been able to see before,” Vallely said. “They also show us that ASASSN-19bt’s rise in brightness was very smooth, which helps us tell that the event was a tidal disruption and not another type of outburst, like from the center of a galaxy or a supernova.”
Holoien’s team used UV data from NASA’s Neil Gehrels Swift Observatory <https://www.nasa.gov/mission_pages/swift/main>  — the earliest yet seen from a tidal disruption — to determine that the temperature dropped by about 50%, from around 71,500 to 35,500 degrees Fahrenheit (40,000 to 20,000 degrees Celsius), over a few days. It’s the first time such an early temperature decrease has been seen in a tidal disruption before, although a few theories have predicted it, Holoien said.
More typical for these kinds of events was the low level of X-ray emission seen by Swift. Scientists don’t fully understand why tidal disruptions produce so much UV emission and so few X-rays.
Astronomers think the supermassive black hole that generated ASASSN-19bt weighs around 6 million times the sun’s mass. It sits at the center of a galaxy called 2MASX J07001137-6602251 <http://simbad.u-strasbg.fr/simbad/sim-basic?Ident=2MASX+J07001137%E2%80%936602251&submit=SIMBAD+search>  located around 375 million light-years away in the constellation Volans < https://www.iau.org/public/themes/constellations/> . The destroyed star may have been similar in size to our sun.
Share on Social Media