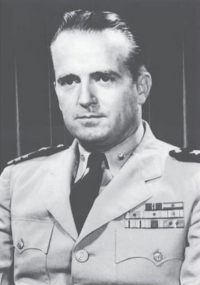 In World War II, Capt. Biard was among the officers, cryptanalysts, and crypto-linguists credited with helping the Allies win the Battle of Midway—and ultimately the war—by deciphering a Japanese codebook. Following the war, he enrolled at Ohio State and studied magnetic resonance, the technology eventually developed into Magnetic Resonance Imaging. After heeding another call to serve his country, this time as the operations officer for the first hydrogen bomb test, Capt. Biard returned to complete his master’s degree in physics in 1953.

Capt. Biard, who passed away in 2009, included in his estate a gift to establish the R. Jack and Forest Lynn Biard Lecture Series in Astro-Particle Physics Fund, named in honor of his parents, and the Captain Forrest R. Biard Undergraduate Research Scholarship Fund in Physics. Ohio State is deeply grateful for Capt. Biard’s thoughtful giving, his deep commitment to education, and his service to our country.