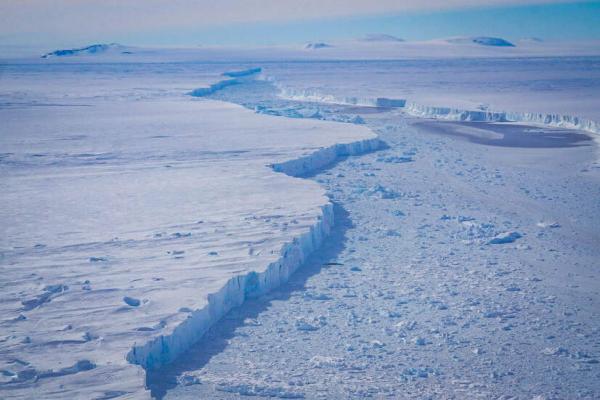 Physicists working at the SLAC laboratory in the US have shown they can detect radar echoes by bouncing radio waves off a cascade of high-energy particles. Their achievement could lead to a new and inexpensive type of neutrino telescope – one capable of detecting neutrinos with energies currently outside the range of both optical observatories and radio antennas.

For around a decade, an unusual telescope in Antarctica called IceCube has been scouring the sky for neutrinos. Comprising dozens of kilometre-long strings of photomultiplier tubes buried in the ice, the observatory detects the Cherenkov radiation emitted by the cascade of charged particles that are created when neutrinos travelling up through the Earth interact with the ice. Since 2013, some of those faint flashes of light have been identified as coming from high-energy “cosmic” neutrinos – which originate from deep space rather than from the Sun or Earth’s atmosphere.

IceCube has detected neutrinos with energies up to 10 PeV (1016 eV), but is unlikely to reach much higher energies. That is because Cherenkov radiation at optical wavelengths is heavily attenuated in ice – travelling at most for about 200 m – which limits the detector volume. Since neutrinos are rarer at higher energies a limit volume imposes an upper limit on energy.

The charged-particle showers generated by neutrino interactions also emit radio waves, which travel far greater distances through ice than does light. Indeed, the ANITA balloon-based detector searches for neutrinos by detecting radio emissions from a vast swathe of Antarctic ice. However, ANITA has the opposite problem as IceCube – it struggles to detect neutrinos with energies less that about 100 PeV because the strength of radio emission scales with the energy of the incoming particle.

In the latest work, Steven Prohira of Ohio State University and colleagues exploit an “active” means of radio detection – in the form of radar echoes. This relies on the fact that a particle cascade moving through a material at near the speed of light will kick out electrons from atoms within the material. In the brief period before those electrons are re-absorbed, they can be made to oscillate by externally applied radio waves. Antennas can then be used to detect the radio waves that are emitted by the oscillating electrons – the “echo”. A benefit of the technique is that it is mostly independent of the incoming particle’s energy.

Prohira was part of a group that tried to demonstrate this technique in the field, using a donated television transmitter and a set of radio antennas positioned close to a cosmic-ray telescope in Utah. The aim was to detect radar echoes from air molecules ionized by passing cosmic-ray showers, confirming that they could observe a signal at the same time as the telescope. But after three years of data-taking, a limited detection efficiency caused in part by the very short lifetime of free electrons in air meant that no radar signal was forthcoming.

Seeking definitive proof of the effect, Prohira and colleagues have now completed a laboratory experiment at End Station A at the SLAC National Accelerator Laboratory in California. There they set up a 4 m-long plastic target serving as a proxy for Antarctic ice and blasted it with a beam containing about a billion electrons, each having an energy of around 1010 eV. The idea was to represent the effect of a neutrino with 1019 eV (somewhat higher than the ideal energy, but a value fixed by other users in the lab).

After directing radio waves at the target and using a second antenna to monitor any echoes, the researchers observed a signal lasting less than 10 ns. Such a signal is predicted by simulations so after accounting for several background sources, the team concluded that it was indeed a radar echo produced by ionization inside the target.

Francis Halzen at the University of Wisconsin-Madison and principal investigator of IceCube, says that while testing echo detection in the field has been “challenging”, researchers have been able to make progress in radio techniques using the SLAC beam. “This is one more example of the power of these beam experiments,” he says.

Prohira and colleagues are now planning a new experiment in Antarctica, at a high enough altitude to detect radar echoes from cosmic-ray showers that reach the ice. If funding is forthcoming, they hope to have the detector up and running within the next couple of years. They aim then to complete a neutrino observatory before the end of the decade. “We first want to show that the technique is viable with a known source before building a full-sized array,” explains Prohira.

The virtue of such an observatory would be its simplicity. Relatively few detector holes in the ice and fairly straightforward radar equipment should, estimates Prohira, mean a price tag of just a few million dollars, as opposed to IceCube’s $275m. Such economy, he claims, will not compromise the science; indeed he reckons that a radar-echo facility could yield important results in identifying sources of high-energy neutrinos as well as in flavour physics. “We would want to be complementary to IceCube,” he says.