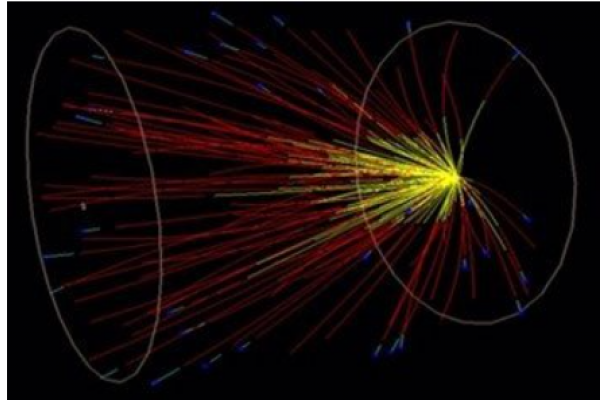 New evidence suggests protons and neutrons go through a “first-order” phase transition — a kind of stop-and-go change in temperature — when they “melt.” This is similar to how ice melts: energy first increases the temperature, then during the transition, the temperature stays steady while the energy transforms a solid to a liquid. Only when all the molecules are liquid can the temperature increase again. With protons and neutrons, the melted state is a soup of quarks and gluons. Scientists studying this quark-gluon plasma (QGP) at the Relativistic Heavy Ion Collider (RHIC) see signs of this stop-and-go transition. The latest data, from low-energy collisions, adds new support for this pattern.

RHIC, a Department of Energy (DOE) Office of Science user facility, was built in part to study how nuclear matter transitions to a soup of free quarks and gluons. RHIC accelerates and collides the nuclei of gold atoms at different energies to study how they melt to form this QGP. Observing a drop in pressure and a longer lifetime of the QGP during the transition would be analogous to the temperature of water holding steady while freezing or melting—a sign of a first-order phase transition. STAR physicists searched for these signs by measuring the sideways deflection of particles (a pressure drop would decrease this “flow”) and the size of the system created (longer-lived systems would appear larger in one dimension). Measuring such tiny size changes required using particles with a wavelength smaller than a femtometer—more than a billion times smaller than the width of a human hair. Generating collisions at the lowest energy for this study required running RHIC with one particle beam colliding with a stationary gold foil inside the STAR detector. Data from these lowest-energy, “fixed-target” collisions extend the energy range and align with the predicted patterns long theorized to occur in a first-order phase transition. Scientists are still collecting and processing data from a more detailed scan to understand additional characteristics of the phase transition at different collision energies.