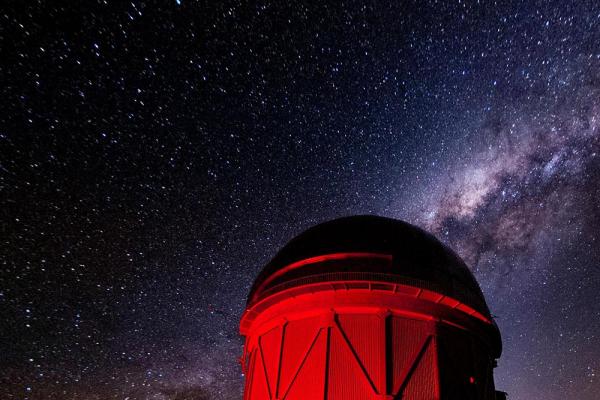 Description
One year ago the Dark Energy Survey (DES) released the initial cosmological results from its first year of data using a combined analysis of weak gravitational lensing and the clustering of large-scale structure in the Universe. CCAPP Fellows Michael Troxel and Niall MacCrann lead the weak lensing analysis that went into these combined constraints, which have now been published in Physical Review D and are featured in an APS 'Viewpoint' article "Weak Lensing Becomes a High-Precision Survey Science" written by Dr. Anže Slosar (Brookhaven National Lab, unaffiliated with DES). As the Viewpoint describes, these first year DES results mark a new era for cosmology research. For the first time, probes of large-scale structure (analysis led by CCAPP Fellows Jack Elvin-Poole) and weak lensing in DES, using just 3% of the sky, have produced constraints on parts of our standard cosmological model with a precision that rivals all-sky cosmic microwave background experiments like Planck. DES has now produced 20 (and counting) papers describing cosmological measurements and careful analysis of this first year of data - over 350 pages of results.
This is just the first step for cosmology from the Dark Energy Survey, though. Cosmological results analyzing the baryon acoustic oscillation (BAO) feature were also released last year, led by CCAPP Fellow Ashley Ross, and cosmology from the first three years of spectroscopically confirmed Type Ia supernovae discovered by DES and from galaxy clusters will be also released this year. The analysis of weak lensing and large-scale structure in the first three years of DES data is also ongoing, coordinated by Troxel and lead partly by MacCrann, Ross, and Elvin-Poole, which will produce constraints on our cosmological models using data that spans 1/8 of the sky. The combination of these probes from the first three years of DES data will tell us more about the cause of the mysterious accelerated expansion of the Universe, which we call dark energy, than the combination of all other cosmological observations to date. All CCAPP fellows mentioned here are members of the Ohio State observational cosmology group lead by Prof. Klaus Honscheid. This work is an important precursor to analyses that will be done on the next generation of this class of experiments: the Large Synoptic Survey Telescope (LSST), the Dark Energy Spectroscopic Instrument (DESI), and the Wide-Field InfraRed Survey Telescope (WFIRST).
Share on Social Media